WAIT, Redirect to home in progress ....

Software for the advanced management of Cables and Wires

The Cables Module is the program dedicated to the advanced management of cables and wires. It is an extension of the working environment of SPAC Automazione.

Easy and intuitive to use, it is a tool born from the experiences in the field with customers operating in the wiring sector.

The heart of the program is a processing command that gets the connections between the objects on the electrical system by reading the diagram and subdivides them into functional interconnections between different panels. Each link is analyzed and all the information is saved in the diagram increasing the data security.

The use of Cables Module brings numerous benefits to the designer, starting from the errors reduction up to the reduction of the design and processing time for the whole electrical system. The advanced management of cables and wires makes faster the interventions and changes on elements already posed on the scheme.

Cables Module is an optional Software for SPAC Automazione

Associate more than one cable / wire to a unique connection

Match the conductors of a multipolar cable with "hanging" connections

You can combine the conductors of a multipolar cable to free connections on one side, for example a conductor connected to the connector as a spare part and insulated in a conduit in the panel, or to a shielded cable screen.

This new option allows, on a connection of the scheme to which a conductor of a multipolar cable has been assigned, to force the 'wire number' with the code of the cable and the conductor identification. The 'wire number' format can be defined by composing the code of the cable and the identifier of the conductor.
The forcing mode is automatic and indicates, in the cable definition command, whether each single cable must force or not its own data on the connections of the scheme to which it has been associated. This option helps the designer in many situations, for example when the cable conductors are small in section and are not numbered, taking the cable data as "wire number" (cable for signal, communication, counting, etc.)

Sometimes it is necessary to modify the cables already laid on the functional diagram, often the modification concerns numerous cables.
It is possible to change several cables at the same time: in a special window you can change the name and material of the desired cables and make a single update.
In the same window it is also possible to change several cables at the same time choosing the old material and the new one: all the cables with the old material that can be transformed into the new one, based on the number of used conductors, are added to the modification list to be updated.
This new function saves time and reduces potential errors in case of substantial changes to the cables or in the case of reworking a previously implemented functional scheme.

Output that allows to draw all the cables defined at once.

Before creating the output, a dialog box opens where the cables can be reordered. It is also possible to reverse a cable so that the source becomes the destination and vice versa.
This output allows to speed up the final phase of the harness documentation and to avoid the duplication of cables, which can be repeated if you generate cable outputs considering the single source panels.

The output has been renewed so that the conductors of a multipolar cable are tapered at the beginning and at the end; there is only a line representing the multipolar cable with the relative data in the middle of the cable drawing. Now the output is even easier and more intuitive to consult.

It allows to group in a bundle a series of unipolar and/or multipolar cables sharing the same path (for example from the general electrical panel to the machine mounted panel or a pushbutton panel).
Each bundle is identified by an abbreviation, a description and a length.

The cables, defined and laid with the Cables Module, can be reported, as an indication, in the "Plant Lay-out", thus providing their position inside the system.

Cable management in the panel unravel

The cables laid with the cable module are managed in the panel unravel command obtaining a complete output including the single-feed and multipolar cables for wiring the switchgear and the interface files with the automatic production machines.

Cables Module 8 includes a new function that carries out the cables dimensioning according to IEC 60364-5-52: 2009 standard. 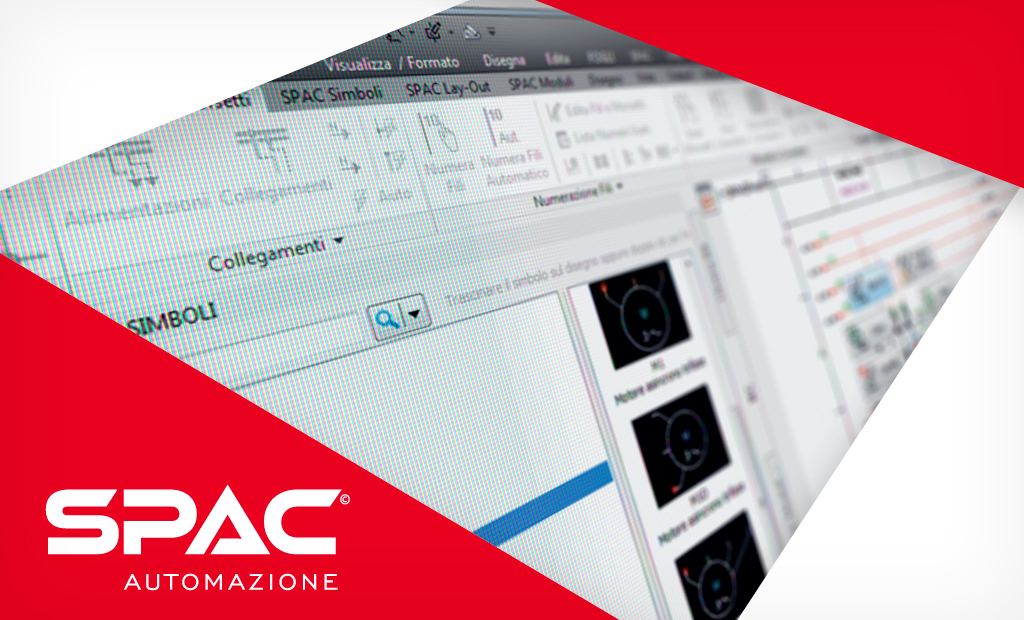 SPAC Automation is a professional design system, highly automated and flexible, that guarantees users the maximum productivity in the design of electrical systems for industrial automation.

Ask for a free quotation We will contact you